Welcome to the Arizona Quilt Documentation Project blog! We are glad you found us. We are passionate about documenting quilts in Arizona. Every quilt is important. Please contact us at azquiltdoc@yahoo.com if you are interested in having your quilts documented. We are happy to help you in any way we can.

Sue began the session by thanking Kate for being photographer as Peggy is in New England with the Migrant Quilt Project.  She also mentioned meeting Dr. James Burns, new Arizona Historical Society Executive Director, in Mid-April at the Arizona History Museum.  Laraine invited her to come to help emphasize the importance of quilts in the Museum collection.  Sue also introduced the Arizona Quilt Documentation Project to Dr. Burns and noted that the Tucson team had documented all but a few of the Museum’s 100+ quilts.  She mentioned other quilts the team has documented, such as Quilt for a Cause, the Jewish History Museum, and others.  Sue later emailed Dr. Burns a description of the documentation project/process, the Quilt Index, and where it’s housed.

Linda shared her vast knowledge and collection of fabrics for the continuing education program.  Her topic, Fabrics over Time, was perfect!  She brought tubs of vintage fabric to support her lecture and distributed a handout, Fabric Over time.  Additionally, she had a vintage Bow Tie quilt hanging with pinned tags in varied places, indicating the fabric and its place in time.  Linda shared a book by Edie McGinnis, A Bag of Scraps. Quilts of the Garment District.
Linda captured everyone’s attention on this continuing ed; if she’s willing, it needs repeating sometime in the future.
On the documentation side, the group documented two quilts, first, Kate’s Dahlia Wreath, a lovely hand quilted piece she found in a yard sale last summer.   Four salmon dahlias with red centers were connected by green leaves while the fifth dahlia proudly took center stage.  Terry shared the next one, Mimbres Symbols, a quilt she made after attending a workshop in 2003. This lovely four block quilt was bordered in stunning turquoise and black.  Details of this program are available on the AZQS web site www.azquiltstudygroup.org/.

Anyone is welcome to visit our meetings!  We love guests.  For questions about either quilt documentation or joining the team, please either call or email Tucson liaisons Sue Franklin, (520.490.4721; suevette63@comcast.net) or Terry Gryzb-Wysocki, (520.749.9326; terry-gw@mindspring.com).  New team members are welcome. Monthly training sessions are held from 9:30 until 12:30 at the Ellie Towne Flowing Wells Community Center on Ruthrauff Road.  The next meeting is Monday, June 11th.

Information about quilt documentation teams throughout Arizona may be obtained from Lynn Miller at either 480.202-1230 or azquiltdoc@yahoo.com.  Lynn also needs people familiar with the computer to aid her with data entry for the Quilt Index.  Lynn does distance training which takes about two hours.

The Phoenix Metro documenting team does most of our Arizona Museums.  Recently we have begun documenting quilts at the Sharlot Hall Museum in Prescott, Arizona.  They have about 80 quilts in their collection.  We completed 20 on our first visit this week. Members of the Heritage Quilters gave us a hand folding and sorting the quilts.  Many hands make light work.  The Sharlot Hall Museum quilts will soon be seen on our Arizona page of the Quilt Index.

It was a great day, always fun and educational to see these quilts up close.  One quilt in the collection, from Sharlot Mabridth Hall, is this faded and worn red and green applique. Still a beautiful example.  The Heritage Quilters have reproduced this quilt for the museum and that quilt can be seen in the governor mansion at the museum.

A member of the American Quilt Study Group is doing research on early quilts with borders of vases of flowers.  I have shared this interesting quilt for the research. This kind of connection and ongoing study, education and research is what makes all the time and effort of documenting our Arizona quilts worthwhile and very exciting. 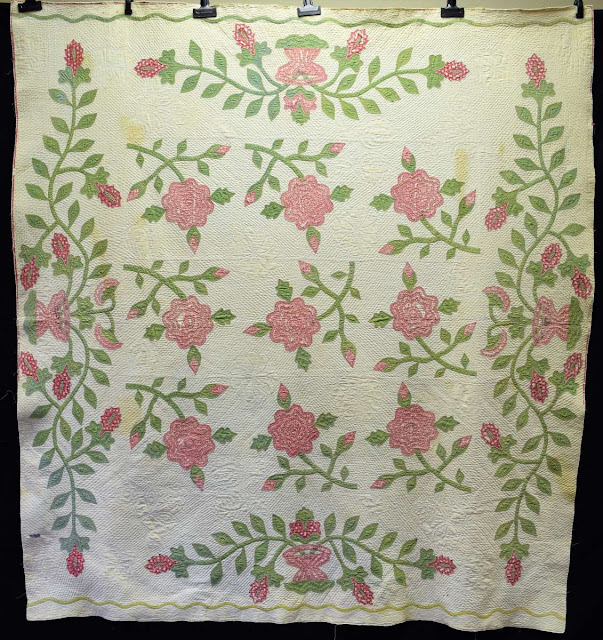 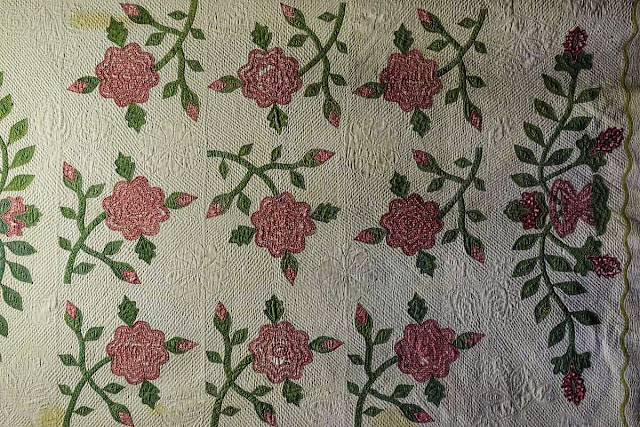 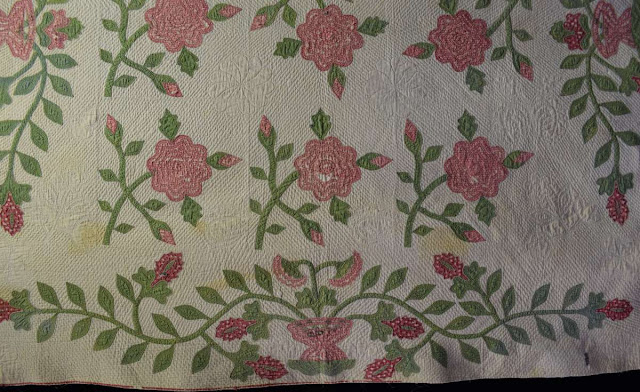 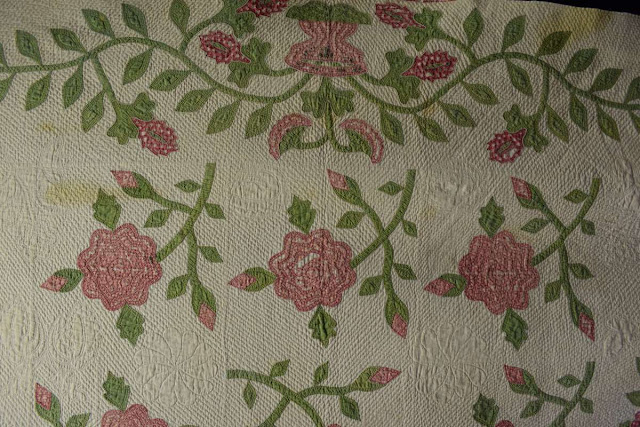 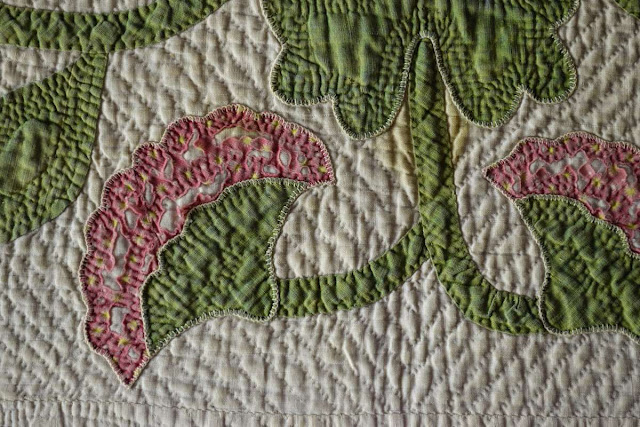 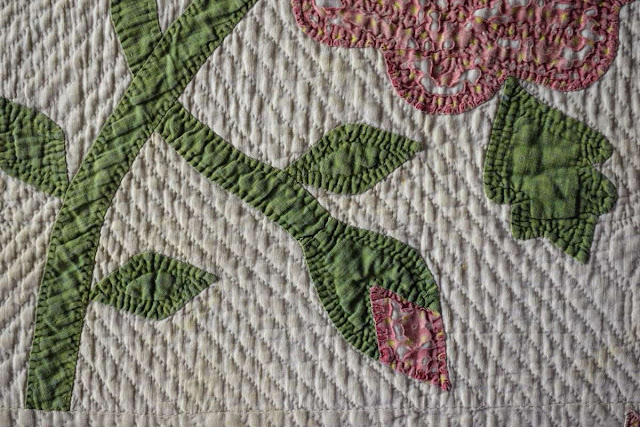 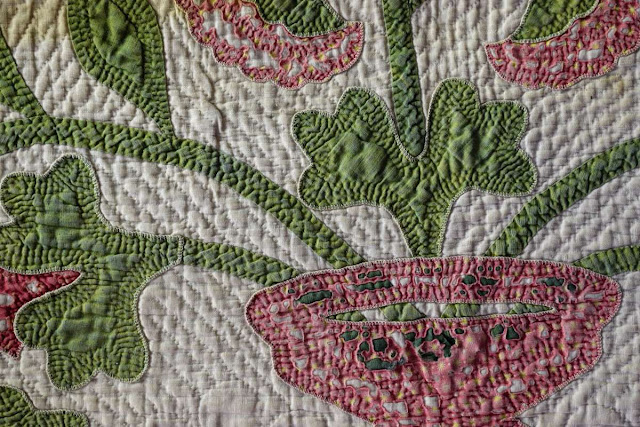 Posted by Arizona Quilt Documentation Project at 7:20 PM No comments: 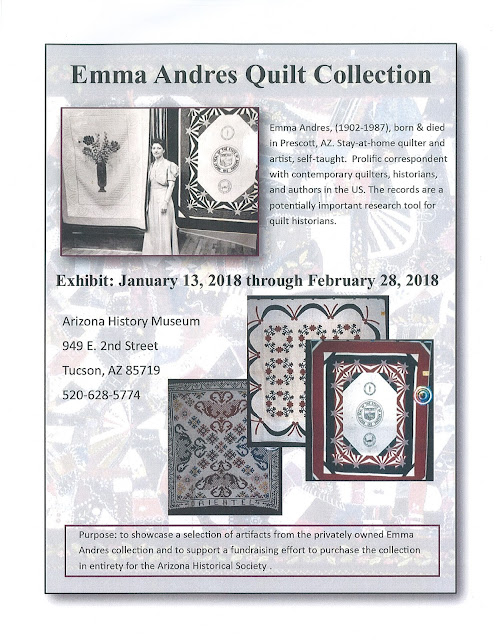 Lynn Miller is sharing a multi-part post about Emma's work on her blog.  Click on the link below to read.  You don't want to miss this!

Below is the information for the Gee’s Bend presentation that Bea Kabler did in December for the doc team.

Bea Kabler offered the continuing education segment.  Her topic: The Quilts of Gee’s Bend.  Bea grew up in Alabama and traveled in the area of the Gee’s Bend quilters many times over the years.  She noted that most of the makers were descendents of slaves from the Mark Pettway’s plantation in Alabama.  There is an area in Alabama known as the “black belt” where the preponderance of people is black.  While called Gee’s Bend in the past, the Post Office renamed it to Boykin in 1949; however, it remains Gee’s Bend to the locals.

The area is U shaped, 5 miles across and 7 miles long and on three sides, has the Alabama River.  In the early years, there was a ferry, but gone since the mid 1960s, making a very long trip on a bad road to get to town to register (to vote).  Bea noted Gee’s Bend inhabitants didn’t lose privileges because they were black, but because “they forgot they were black.”

Before 1932, a kind merchant extended credit to the folks of Gee’s Bend.  That changed dramatically when he died and his shrewish wife took over the store.  She collected with a vengeance!  In 1962, a dam to generate electricity was built and the outcome meant the most fertile acres were flooded.  Gee’s bend women began to have an interest in quilting and also to have some involvement with a bee in nearby Alberta.

Gee’s Bend quilters, from remote Gee’s Bend, ultimately became Cinderellas. They were stars on the contemporary art scene with vivid patterns made with fabrics from their every day clothes.  Shy, elegant, prolific, they delighted in the respect and appreciation that greeted their efforts.  Their goal:  to break the pattern: to see what others do and then change it, to make it their own.  Gee’s Bend quilters offered bold new approaches to a distinctive American art form. The quilts of Gee’s Bend introduced bright contrasting color and a dramatic contrast to traditional American and European quilting.

Posted by Arizona Quilt Documentation Project at 12:39 PM No comments: 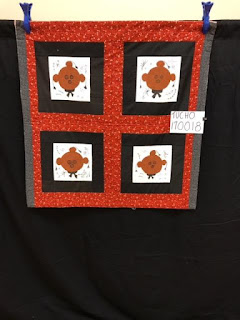 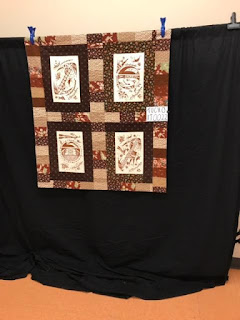 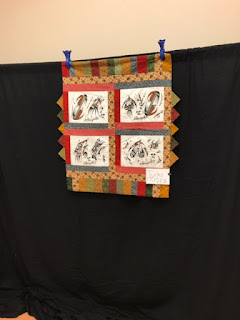 3) Another Hopi Pottery four block, again hand painted.  This one separated by either salmon or gold print sashing or blue print and red or salmon sashing.  It has short saw tooth borders on sides; strips, picking up the colors of the sashing, on the quilt’s top and bottom. 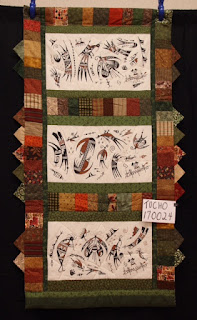 4)  Bea’s last Hopi Pottery block is rectangular with three hand painted blocks separated by sashings of green with pieced rectangles between.  Saw tooth borders on each side.  Warm brown shades predominate on this quilt. Bea brought another quilt that she hand pieced and then had hand quilted; her Mimbres Queen treasure.  This quilt, done in turquoise, black and cream is Bea’s daughter’s favorite. 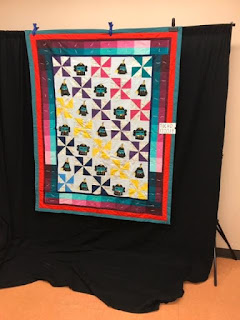 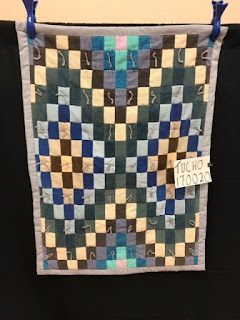 2) The next, a One Patch Hopi is made of corduroy with a flannel back.  The tied quilt is made from greens, blues, and browns and looking at it from a distance, one can imagine butterfly wings. 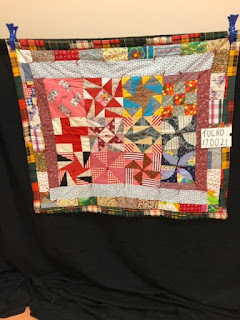 Details of this program are available on the AZQS web site www.azquiltstudygroup.org/.

Anyone is welcome to visit our meetings!  We love guests.  For questions about either quilt documentation or joining the team, please either call or email Tucson liaisons Sue Franklin, (520.490.4721; suevette63@comcast.net) or Terry Gryzb-Wysocki, (520.749.9326; terry-gw@mindspring.com).  New team members are welcome. Monthly training sessions are held from 9:30 until 12:30 at the Ellie Towne Flowing Wells Community Center on Ruthrauff Road.  The next meeting is Monday October 2nd.  Another date to mark on your calendars is the Public Documentation on November 11th at the Arizona History Museum.  Contact either Sue or Kate Clark (520.742.1000) to register no more than two quilts.

Information about quilt documentation teams throughout Arizona may be obtained from Lynn Miller at either 480.202.1230 or azquiltdoc@yahoo.com.  Lynn also needs people familiar with the computer to aid her with data entry for the Quilt Index.  Lynn does distance training which takes about two hours.
Posted by Arizona Quilt Documentation Project at 10:42 AM No comments:

The Migrant Quilts will be on display at the Tempe History Museum from August 24 to September 21. Share the invitation with anyone who would be interested. 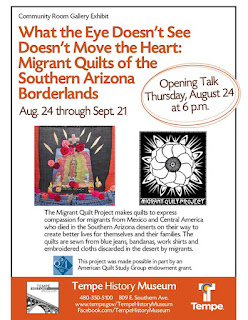 Posted by Arizona Quilt Documentation Project at 8:13 AM No comments:

The Arizona Quilt Documentation Project is going into it's 6th year documenting quilts in Arizona. You can see 2915 Arizona quilts on the Quilt Index. I find that amazing! It would not have been possible without all the volunteers that work so hard getting all the quilts documented. Many have been with us since the beginning.
I know you have been thinking you need to get your own quilts documented. Yes, you do. It is not hard. You can print out the forms right here on this group. Contact me anytime about getting photos of your quilts.
I have been working steadily getting my quilt collection documented. It sure is fun to see them on the Quilt Index. 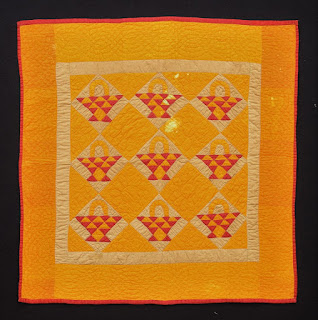 Posted by Arizona Quilt Documentation Project at 10:03 AM No comments: